From Wikipedia, the free encyclopedia
For other places with the same name, see Kerman (disambiguation).

pronunciation (help·info)) (Persian: كرمان‎‎, also Romanized as Kermān, Kermun, and Kirman; also known as Carmania)[3] is the capital city of Kerman Province, Iran. At the 2011 census, its population was 821,374, in 221,389 households, making it the 10th most populous city of Iran.[4]

It is the largest and most developed city in Kerman Province and the most important city in the southeast of Iran. It is also one of the largest cities of Iran in terms of area. Kerman is famous for its long history and strong cultural heritage[citation needed]. The city is home to many historic mosques and Zoroastrian fire temples. Kerman is also on the recent list of the world’s 1000 cleanest cities[citation needed]. Kerman became capital city of Iranian dynasties several times during its history. It is located on a large, flat plain, 1,036 km (643 mi) south of Tehran, the capital of Iran.

Kerman was founded as a defensive outpost, with the name Veh-Ardashir, by Ardeshir I, founder of the Sassanid Empire, in the 3rd century AD. After the Battle of Nahāvand in 642, the city came under Muslim rule. At first the city’s relative isolation allowed Kharijites and Zoroastrians to thrive there, but the Kharijites were wiped out in 698, and the population was mostly Muslim by 725. Already in the eighth century the city was famous for its manufacture of cashmere wool shawls and other textiles. The Abbasid Caliphate‘s authority over the region was weak, and power passed in the tenth century to the Buyid dynasty, which maintained control even when the region and city fell to Mahmud of Ghazna in the late tenth century. The name Kerman was adopted at some point in the tenth century.[5] 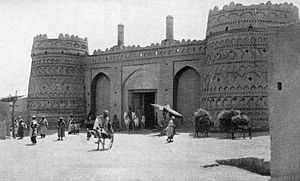 The Masjid gate through which Agha Mohammad Khan entered the city 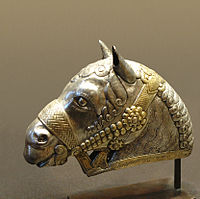 Under the rule of the Seljuk Turks in the 11th and 12th centuries, Kerman remained virtually independent, conquering Oman and Fars.[6] When Marco Polo visited Kerman in 1271, it had become a major trade emporium linking the Persian Gulf with Khorasan and Central Asia.[7] Subsequently, however, the city was sacked many times by various invaders. Kerman expanded rapidly during the Safavid Dynasty. Carpets and rugs were exported to England and Germany during this period.[8]

In 1793 Lotf Ali Khan defeated the Qajars, and in 1794 he captured Kerman. But soon after he was besieged in Kerman for six months by Agha Mohammad Khan Qajar. When the city fell to Agha Mohammad Khan, angered by the popular support that Lotf Ali Khan had received,[clarification needed]many of the male inhabitants were killed or blinded, and a pile was made out of 20,000 detached eyeballs and poured in front of the victorious Agha Mohammad Khan.[9] Many women and children were sold into slavery, and in ninety days the city turned into ruins. However, the Zoroastrians of Kerman who had been strong supporters of Lotf Ali Khan suffered the wrath of the founder of Qajar dynasty the most during this period.

The present city of Kerman was rebuilt in the 19th century to the northwest of the old city, but the city did not return to its former size until the 20th century.

Kerman is located on a high margin of Kavir-e Lut (Lut Desert) in the south-central part of Iran. The city is surrounded by mountains. Kerman is also located along the Saheb Al Zman mountain. The city is 1,755 m (5,758 ft) above sea level, making it third in elevation among provincial capitals in Iran. Winter brings very cold nights to Kerman. Mountains in the south and southeast Jftan Joopar and Plvar and Kerman[clarification needed] have snow all year round. Kerman is located at latitude 30.29 and longitude 57.06.

The city of Kerman has a moderate climate. The average annual rainfall is 135 mm. Because it is located close to the Kavir-e lut, Kerman has hot summers, and in the spring it often has violent sand storms. Otherwise, its climate is relatively cool.[8]

For Iranian paleontologists, Kerman has always been considered a fossil paradise. The discovery of new dinosaur footprints in 2005 renewed hopes for better understanding the history of this area.[10][11]

The economy of Kerman is mostly based on farming, notably nut farming and also mining. Sarchashmeh Copper mine is the second biggest copper mine in the world after the one located in Chile. Pistachios are an important part of the economy in Kerman, with Kerman Province being the largest producer of pistachios in Iran and the world.

Carpet weaving is one of the main industries of the city, and the carpets produced there are renowned internationally.[7] Carpet weaving is a very old tradition in Kerman. The oldest carpet discovered in Kerman, dates from about 500 years ago.[12] Cotton textiles and goats-wool shawls are also manufactured.[13]

A number of modern establishments such as textile mills and brickworks also have been constructed. The province’s mineral wealth includes copper and coal.[7]

Kerman has an abundance of architectural relics of antiquity.

Kerman is among several cites in Iran with a strong cultural heritage, which is expressed in the local accent, poetry, local music, handicrafts and customs that Kerman has introduced to the world.

The only anthropology Iran museum of Zoroastrians in the world[clarification needed], which showcases the ancient history of Zoroastrians, is in Kerman’s Fire Temple. The idea of launching the museum along with the library of Kerman’s Zoroastrian Society came to light in 1983, when the head of the society, Parviz Vakhashouri, and the former head of the library, Mehran Gheibi, collected cultural heritage artifacts of Kerman’s Zoroastrian community. These two officials added many other objects to this collection. The museum was officially inaugurated during Jashn-e Tirgan in 2005 by Iran’s Cultural Heritage, Handicrafts and Tourism Organization (ICHHTO).

Jashn-e Tirgan or Tiregan is an ancient Iranian rain festival observed on July 1. The festivity refers to archangel Tir (literally meaning arrow) or Tishtar (lightning), who appear in the sky to generate thunder and lightning for providing much needed rain.

The Sadeh ceremony is celebrated every year in Kerman.

Some of the handicrafts and souvenirs of the province of Kerman are traditional embroidery known as pateh, carpets, rugs, jajeems, Kilims (a coarse carpet), satchels, and other hand woven articles. Caraway seeds and pistachio of Rafsanjan and Kerman are best of the main items of this province.[14]

The people of Kerman are Persians, and most are Shi’a Muslims. Kerman has a small but culturally significant Zoroastrian minority.

Some of these figures are estimates only, official census results are indicated with (¹).[16]

Kerman is the media center of the Kerman Province. Many newspapers are published in the city such as Kerman Emruz (Kerman Today) and Bidari. Hadis–Pasargad is also a weekly newspaper. Kerman has a 24-hour TV channel known as the Kerman Channel or Channel 5. The city also has a radio station. 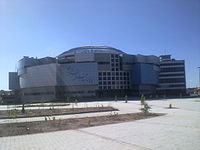 Kerman is on the Tehran, Bandar Abbas and Zahedan route. Kerman Airport is considered one of Iran’s main airports. It has daily and weekly flights to Tehran, Ahwaz, Yazd, Esfahan, Bandar Abbas, Mashhad and Shiraz.[8] Also, the Trans-Iranian Railway passes through this city.[8] Kerman’s newly built bus terminus, Adineh, opened in May 2013.

The international company Mahan Air was established, and has its headquarters, in Kerman. Flights between Kerman and the remotest parts of Iran and the world are handled by Mahan Air. Established in 1992 in Kerman, this company has the highest reputation of quality among Iranian airlines and is now on the list of the best airline companies in the region.[citation needed]

Kerman’s Metro had been approved by the government cabinet and was meant to cover large parts of the metropolitan area in Kerman, but the project’s operations were canceled due to several issues. Later it was heard that a tram project would replace the Metro project, but this project has not been launched yet.

In May 2016, during Indian Prime Minister Narendra Modi‘s trip to Iran, agreement was signed to develop two births at Port of Chabahar and to build new Chabahar-Zahedan railway, as part of North–South Transport Corridor, by Indian Railway‘s public sector unit Ircon International.[18]

Kerman is one of the leading cities in Iran in the field of health and many people from neighboring provinces such as Sistan and Baluchestan, Hormozgan[clarification needed] visit the city for medical care. Kerman is on the recent list of the world’s 1000 cleanest cities.[citation needed]

Qasem Soleimani (Commander of the Qods Force, a division of the Iranian Islamic Revolutionary Guard Corps)